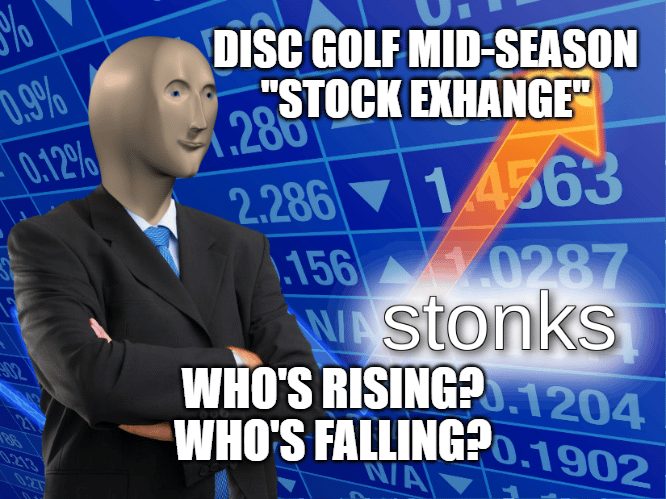 Gannon Buhr — The 17-year-old continues to impress, as he currently sits third in the DGPT points standings (only 5.31 points behind second-place Calvin Heimburg). He has firmly established himself as a top-five player in the world, with top-10 finishes in each of his last 11 DGPT or major events. He earned his first DGPT victory (albeit a Silver Series event) a couple months back at the Santa Cruz Masters Cup. His short game is incredible, as he ranks sixth in scrambling (67%), seventh in Circle 2 putting (34%) and eighth in Circle 1X putting (88%).

Simon Lizotte — He’s been one of the hottest players on tour post-Champions Cup, bagging five straight top-six finishes (including back-to-back victories at the OTB Open and Portland) before struggling a bit last weekend at Idlewild. He sits seventh in the DGPT points standings and ranks fourth in parked rate (15%).

Kyle Klein — The youngster who broke out in 2021 had been mostly steady but unspectacular in 2022, never finishing outside the top 30 but rarely inside the top 10. That has changed in the last two DGPT events — a tie for third at the Preserve and third place outright at Idlewild — and he has moved up to ninth place in the season standings. He ranks eighth in parked rate (13%).

Isaac Robinson — This is a pretty easy pick after his breakthrough victory at Idlewild, but there were signs of it coming earlier. He tied for fifth in the Waco Charity Open at the start of the season and took third in Portland more recently. He leads the tour in Circle 1X putting at a cool 91%.

Adam Hammes — The Hammer had a roller-coaster first half of 2022, with some solid outings (second in Music City, tie for seventh in Las Vegas) and some other head-scratchers (tie for 77th at Waco, tie for 88th in the Champions Cup). But more recently he seems to be finding his form, with three top-10 finishes in his last four outings (tie for fifth in Portland, tie for sixth at the Preserve, tie for ninth at Idlewild). He ranks ninth in Circle 1X putting (87%) and is just outside the top 10 in Circle 2 putting (32%).

The 2022 disc golf season is in a virtual midway point and it’s time for a power ranking update. Here’s our updated top-10 selections in MPO and FPO. Check out the list here – https://discgolffanatic.com/disc-golf-pro-tour-2022-mpo-and-fpo-top-10-rankings-june-update/

Albert Tamm — The Estonian star won the Silver Series Open at Tallahassee a few months back but otherwise had played pretty mediocre disc golf. And while he wasn’t at his best at Idlewild, he produced top-six finishes in each of his previous three tournaments (tie for fifth in Portland, tie for sixth in both the Beaver State Fling and the Preserve). He ranks eighth in Circle 1 in regulation (44%).

Catrina Allen — I had Paige Pierce as the No. 1 player of 2022 until Sunday, when Allen won Idlewild while Pierce finished tied for 10th. That follows the USWDGC, where Allen finished fourth and Pierce tied for 21st. Allen now leads the DGPT points standings comfortably. She leads the tour in scrambling (56%), ranks fourth in Circle 2 putting (21%) and is fifth in Circle 1 in regulation (38%) and Circle 2 in regulation (60%).

Valerie Mandujano — Barring some stunning development, she is going to win the FPO most improved player award in a landslide. She won the Waco title several months ago and has since added back-to-back victories in Portland and the Beaver State Fling before a runner-up finish in the USWDGC. She stands third in the DGPT points and ranks third in scrambling (52%), fifth in Circle 1X putting (77%) and seventh in Circle 2 putting (18%).

Ohn Scoggins — I feel like the veteran is largely going under the radar, but the short-game wizard is having a phenomenal 2022. She has 10 top-seven finishes in her 12 DGPT or major championship starts, including top-three finishes in four of her last five events (second in Portland, third at the Beaver State Fling, third in the USWDGC, tied for second at Idlewild). She sits fifth in the DGPT points and leads the tour in Circle 2 putting (30%) while ranking second in Circle 1X putting (82%) and scrambling (54%).

Ella Hansen — The 2021 rookie of the year has only improved in 2022, with six top-four finishes in her last nine DGPT or major events since a poor Champions Cup showing. She tied for second in both the Masters Cup and Preserve, and sits sixth in the DGPT points. She is ranked in the top 10 in parked and Circle 1 in regulation percentage, and just outside the top 10 in Circle 2 in regulation.

Hailey King — Until her USWDGC victory, 2022 had largely been a forgettable one for the youngster. Amazing what winning a major title does. She ranks fourth in fairway hits (73%) and sixth in Circle 2 in regulation (59%).

Paul McBeth — Since finishing second in Jonesboro, the McBeast has largely failed to show up. He has one top five (a tie for fifth in Portland) and three other top-10 finishes in his last seven events, with an average finish of 15.86 in that span.

Kevin Jones — A lot of people thought Jones would take a leap forward and possibly contend for top-five world status in 2022, but it just hasn’t happened. He has only three top-10 finishes in his 13 DGPT or major starts, the best of them a third-place effort in Jonesboro.

Nikko Locastro — In his first five DGPT events of 2022, Locastro placed fourth twice (Open at Belton, Music City) and averaged a finish of 10.6. In his seven DGPT or major starts since, he hasn’t finished higher than a tie for 15th, with an average finish of 27.43. Ouch.

Kona Panis — More than enough has been written about her struggles in 2022 after getting her big contract (and I’m happy for her that she got it). I’m not going to deep dive into it here, other than to say she has just three top-10 finishes in 13 DGPT or major events, and none in her last seven starts.

With the 2022 season halfway in the books, what player’s stocks would you buy/sell?
Leave a comment down below!

A disc golf bag is an important equipment to have, if you want to enjoy the game of disc golf to the fullest. Besides being the best way to carry your discs, a disc golf bag can help you carry other...

On January 22nd 2023 Estonian disc golf club Five Under hosted an event inside of one the biggest shopping centres in Estonia, T1 shopping centre at Tallinn. This was the first time ever disc golf...

Not what I wanted to read.

This slow-mo air bounce throw-in with the leaves .

In search of green teepad 😆

What sorcery is this? 😁