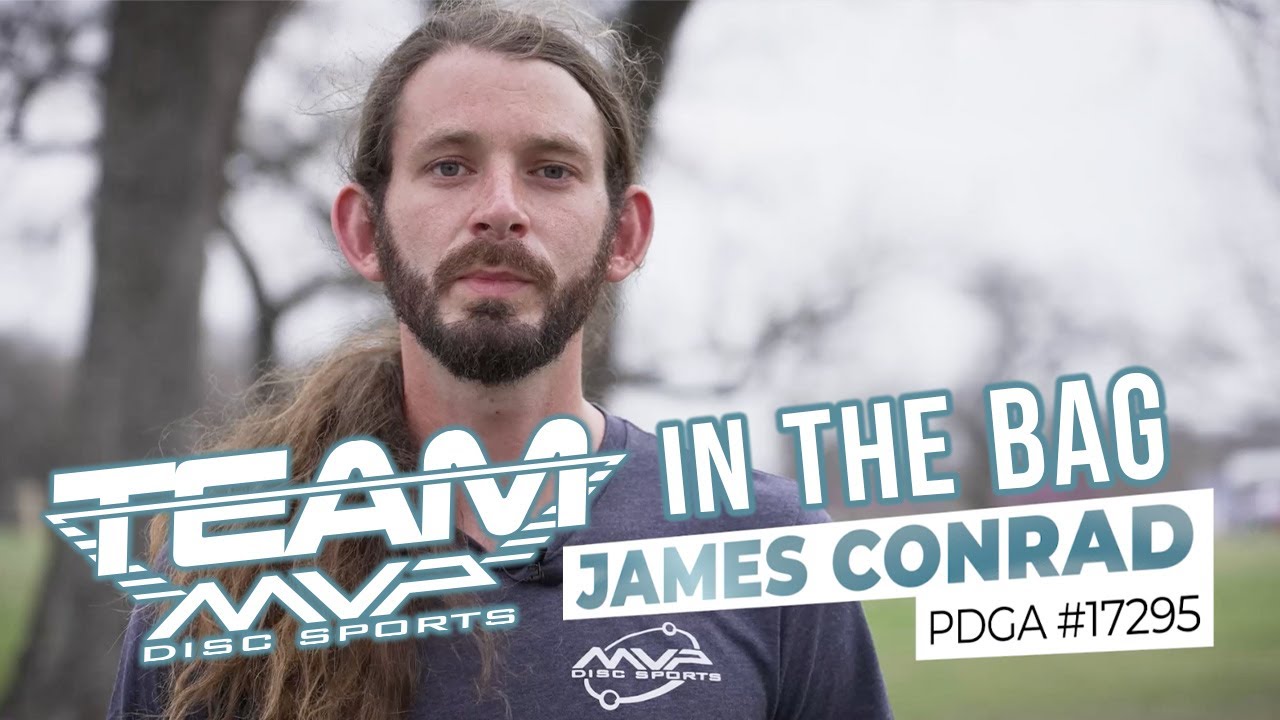 James Conrad, PDGA #17295, is a professional disc golfer from Blacksburg, Virginia, United States. James Conrad holds the title for the 2021 Disc Golf World Championship winner and 2019 United States Disc Golf Champion. He has been a member of PGDA since 2000, and his total career earnings are $156,672.55 (as of June 1st 2021). 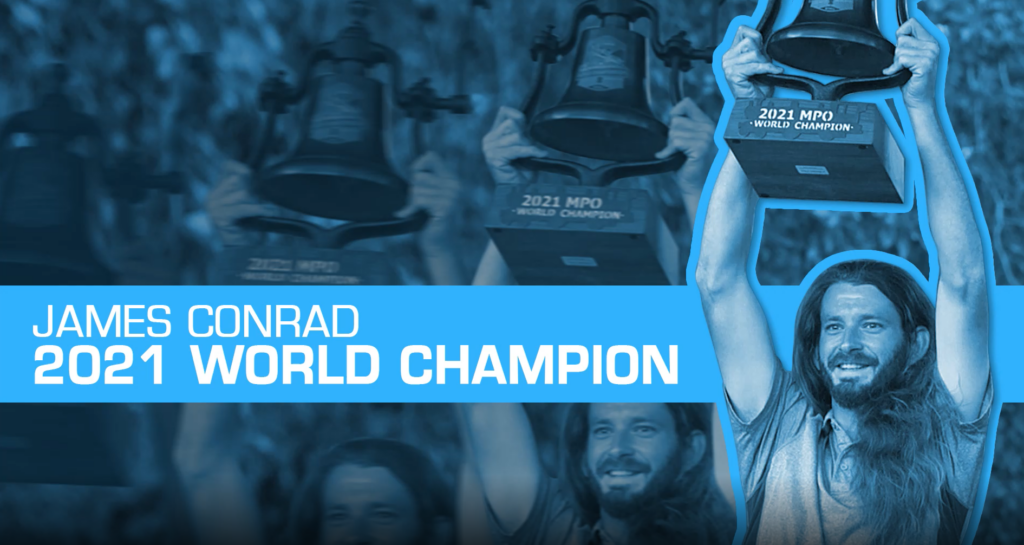 First of all, James Conrad uses the MVP Voyager Pro V2 disc golf bag to carry his discs around. The Voyager Pro V2 can fit up to 22 discs comfortably, has a lot of storage space, 2 drink holders and 2 large side pockets.

MVP says that the Voyager Pro V2 is a perfect backpack bag for competitive play as it has an upgraded, more rigid frame with improved padding for a more comfortable feel. The Voyager Pro V2 has been upgraded to Cordura 1000D material, making the bag 25% lighter. Check out the MVP Voyager Pro disc golf bag on InfiniteDiscs.com. 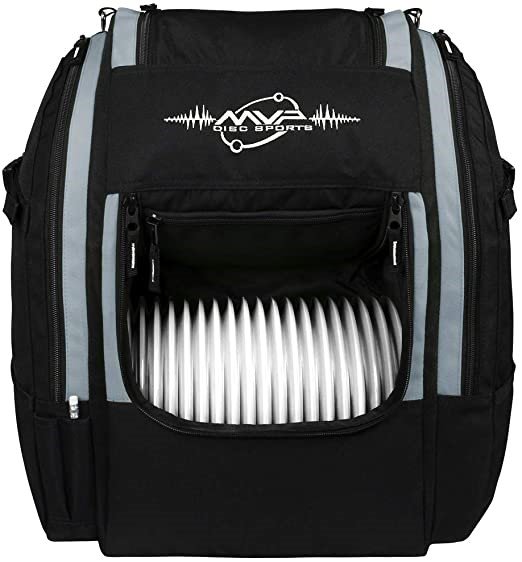 James Conrad putts with MVP Electron Nomad that feel great in the hands and have a soft grip. Check out MVP Nomad here on InfiniteDiscs.com. 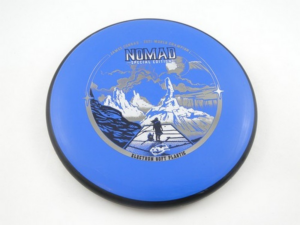 For throwing putters James Conrad uses the Axiom Discs Envy putters, and he has an assortment of four Envy putters in his bag. 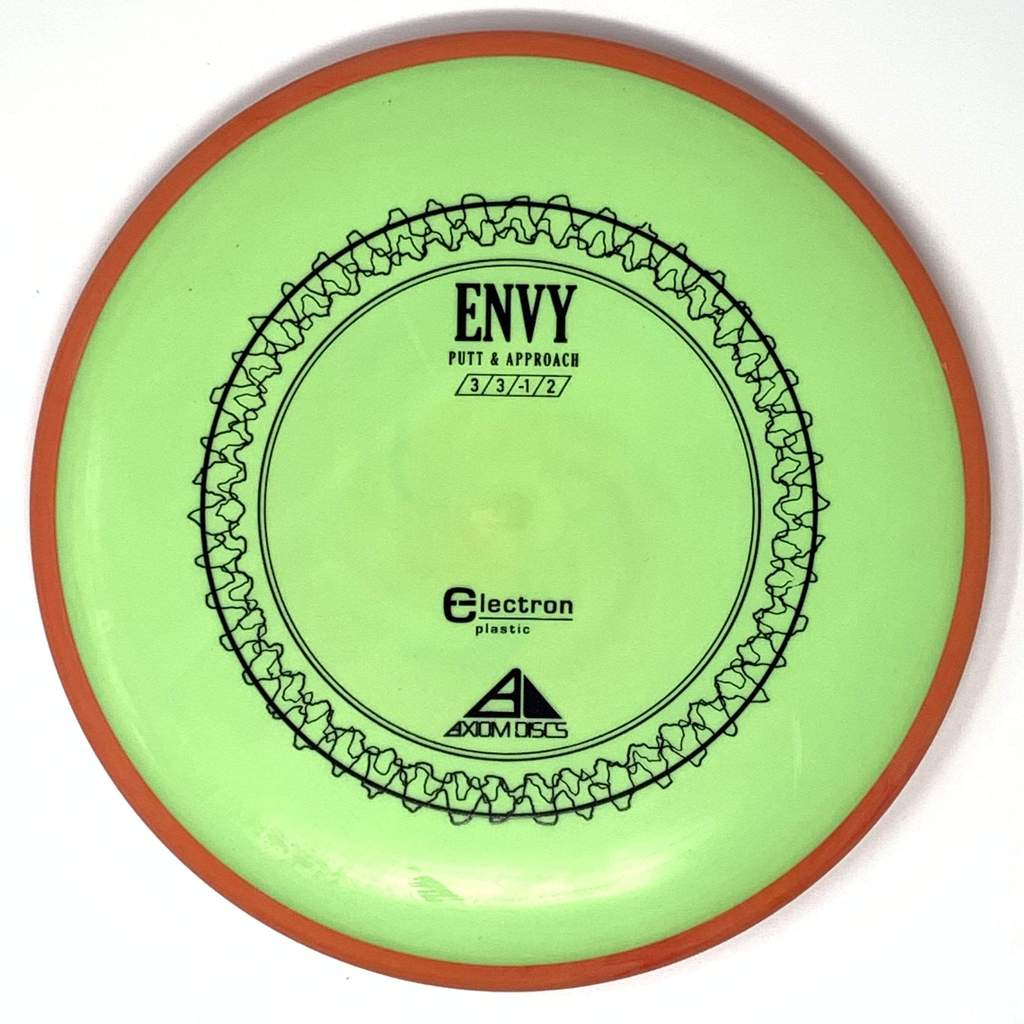 The first putter he uses is beaten up, but he likes it because it is understable, and he gets quick hyzer flips out of it or a long high jump putt. The next one is the Electron firm one, and it’s great for a super straight shot. He starts with the hyzer shot, and it pops up to a flat and finishes a little bit right.

The third throwing putter is also an Electron firm plastic one, this one is not yet beaten up, but it’s a little more overstable. This putter is the extra disc that he uses for practice. The other putter is the Cosmic Electron Envy, and it’s incredible looking and feels great in the hands. He also describes it as being overstable, and it’s excellent for hyzer shots. James says that he can also get a bit of a flex line out of it if he forces it over. He feels that it has been a great putter for him. Grab an Axiom Discs Envy here on InfiniteDiscs.com.

Axiom Discs Envy was the disc James Conrad threw the “Holy Shot” with in 2021 Worlds to force playoff against Paul McBeth, which eventually James won and became the 2021 Disc Golf World Champion.

It’s time to commemorate the Greatest Throw in Disc Golf History with one of the best discs ever created! Check out the Axiom Discs Envy here on InfiniteDiscs.com.

Another putter that is in James’ bag is the MVP Entropy. He feels that it is the only overstable putter he has been bagging, but it has been helpful, especially in Vegas when there were high winds. He can hit it hard while keeping it low, and he can control its distance and speed. You can land near your target by controlling backhand or forehand touch shots with this disc. Check out the MVP Entropy at InfiniteDiscs.com. 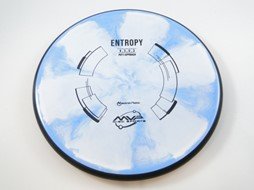 James also has a Neutron plastic Entropy in his bag. It has an MVP Open stamp on it, and it’s more overstable than his baseline Electron firm one, but he only uses this in certain situations.

James uses the Axiom Envy so much that he does not need a midrange disc golf disc right now. But when there is a need for a midrange disc, his best choice is the MVP Reactor, and he has two in his bag. 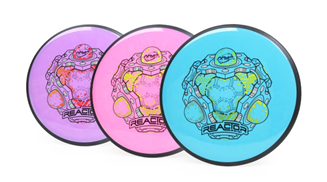 The MVP Reactor is designed to follow any line in the field and can handle both the big turnovers and hyzers. Basically, it’s a workhorse midrange that is a great addition to your collection. The one James Conrad uses is a dye by Tim Perkins, and he got it through a connection by OTB discs. It’s aesthetically appealing and feels great coming out of the hand when it’s being thrown. Grab yours here on InfiniteDiscs.com.

Onto the next category of discs, fairway drivers, of which James’ bags the MVP Cosmic Neutron Relay and is also a little more overstable because it is new. It’s a cool dye, and the glow plastic feels good. It’s only a speed 6 fairway driver and James equates it to the midrange category. 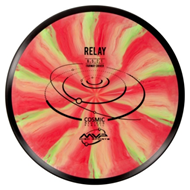 He has found it convenient, especially when he gets out into a wooded course like in Waco, where there are mostly tight and hyzer-flip lines. The disc is suitable in these places because he can hyzer and pop up to flat going really straight. James likes this disc because it is understable and it’s a slow disc.

He also equates the Relay to the Crave, which he recently started carrying in his bag. However, he is not sure whether he can use it in the tournament because he is more comfortable using the Relay. Check out MVP Relay here on InfiniteDiscs.com.

The Axiom Discs Crave is a speed 6.5, glide 5, turn -1 and fade 1 disc, which is best for really controllable lines and still gets some reasonable distance. This disc can be found in a range of colors and it is easy to throw as it provides controllable straight flights. James feels covered when he has both the Relay and the Crave. Grab one here on InfiniteDiscs.com. 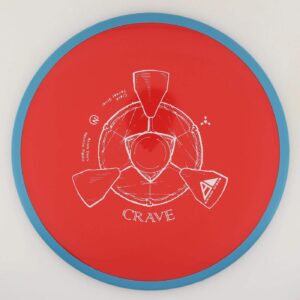 The other disc that he is bagging that can be characterized as a fairway driver is the MVP Volt. He loved it the first time he threw it and selected it for his first time series disc together with the Bendy James. He feels stoked with its stamp and how it flies because it goes straight and can handle a lot of power.

The Volt can definitely fly great on a hyzer or even a little bit of a forced-over line, and he views it as a great utility having a Fairway Driver. He looks forward to carrying another one in his bag. James feels that he could release the Cosmic Neutron in favor of the Volt for something on a bit more anhyzer because the Neutron feels more overstable. The Volt has that little extra stability on the wind, especially for his Tour Series Volt. Check out the MVP Volt here on InfiniteDiscs.com. 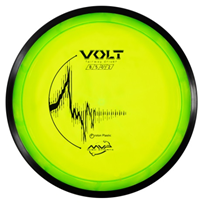 James also bags the MVP Tesla in Fission plastic, and he has a good grip with the disc, which feels like a bomber in downwind as it can go to the farthest than some of his other discs in his bag. He has found out that the Fission Tesla compliments the Volt really well. His Tesla is in maximum weight, and he feels they are similar. James can throw a lot of the same shapes with it, although the Tesla has a little extra speed; thus, he can get a little extra distance.

James also has the Neutron Tesla, and he describes it as being pretty and swirly and a bit more overstable. MVP Tesla is a speed 9 disc golf driver, and he feels covered with them. You can trust the Tesla for long-range pinpoint accuracy as it extends high power and can gain extra distance as it finishes in the fairway. For more details about MVP Tesla, check out InfiniteDiscs.com. 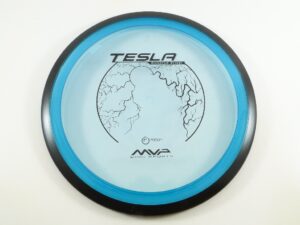 James has also added the Axiom Discs Wrath in his bag. Although he has not yet used it in a tournament, he likes it as a controllable driver. He is still learning the MVP lineup, which involves cycling in and out some discs from time to time and evaluating what he can trust. He is anticipating that the Wrath could fill that slot in the future.

The Wrath is easy to throw and is the best choice you can make when the wind is unpredictable. It can be used in long hyzers for a fast and long distance driver. Grab yours here on InfiniteDiscs.com. 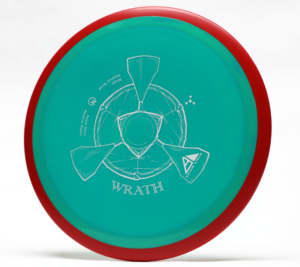 James also bags the Axiom Discs Insanity, which looks beautiful and has a citrus burst kind of look, and he views it as being cool. However, it flies pretty understable, and he has been using it as a roller disc or on a shot when he needs a late flip. Therefore, he puts a lot of hyzer on it, and it slowly stands up and finishes to the right. He has achieved some big shots and rollers with the Insanity. 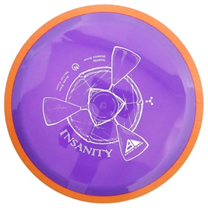 James also bags some “slower” Distance Driver class type of discs. These include the Axiom Discs Fireball and the MVP Motion, which he views as being similar and even interchangeable. The Motion disc is flat, and he feels that it is more overstable than the Fireball. However, in the Vegas tournament, he threw the Fireball a lot, and it was able to cover some distance when he hit it hard and flat. He anticipates using the Fireball more often since it has been windy in Waco. However, he may switch to the Motion if the wind gets stronger since it’s more overstable, even if the two are similar. 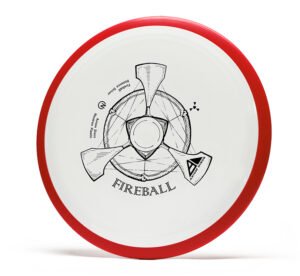 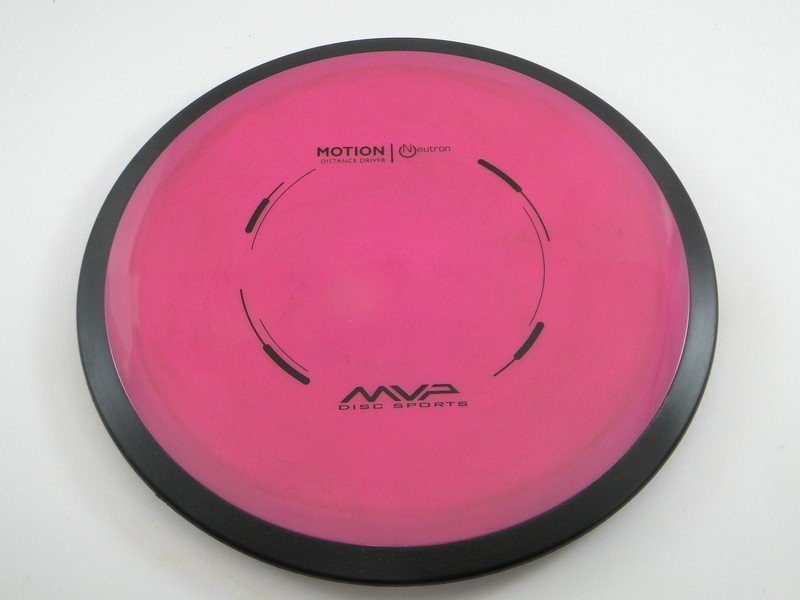 James also bags some high-speed drivers which includes the MVP Photon. He feels that he will be using it more during the season, and he has been enjoying the Fission plastic. He has 3 of these discs in his bag and one of them is a bit lightweight, only 164 grams. It has been a real bomber, especially downwind. He also has 2 others that are max weight in blue and red colors. They are suitable for practice, and he can have good control over them even if it’s not necessarily for maximum distance. 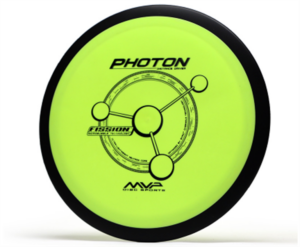 James also has a fourth MVP Photon in his bag, the Cosmic Neutron one. He feels that all these Cosmic Neutron plastics are a bit more overstable, and it is the same case for this one. He does not get a lot of distance from the disc, although it can be a little more dependable. It is not capable of rolling back on his face when the wind picks up. Check out the MVP Photon here on InfiniteDiscs.com.

The last high-speed driver in James’ bag is the Axiom Discs Panic. It’s very overstable and has a speed of 13, and it has been a good workhorse for him during the season. He can trust the disc when he hammers it into the wind or hits it with a hyzer. He values that he has it in his bag as an overstable and a fast disc. Grab yours here on InfiniteDiscs.com. 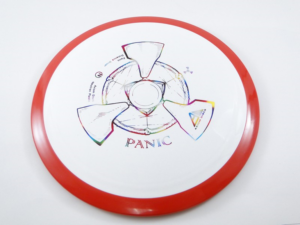 You can try out some of these discs used by James Conrad, 2019 United States Disc Golf Champion & 2021 Disc Golf World Champion.

A summary of discs in James Conrad’s bag 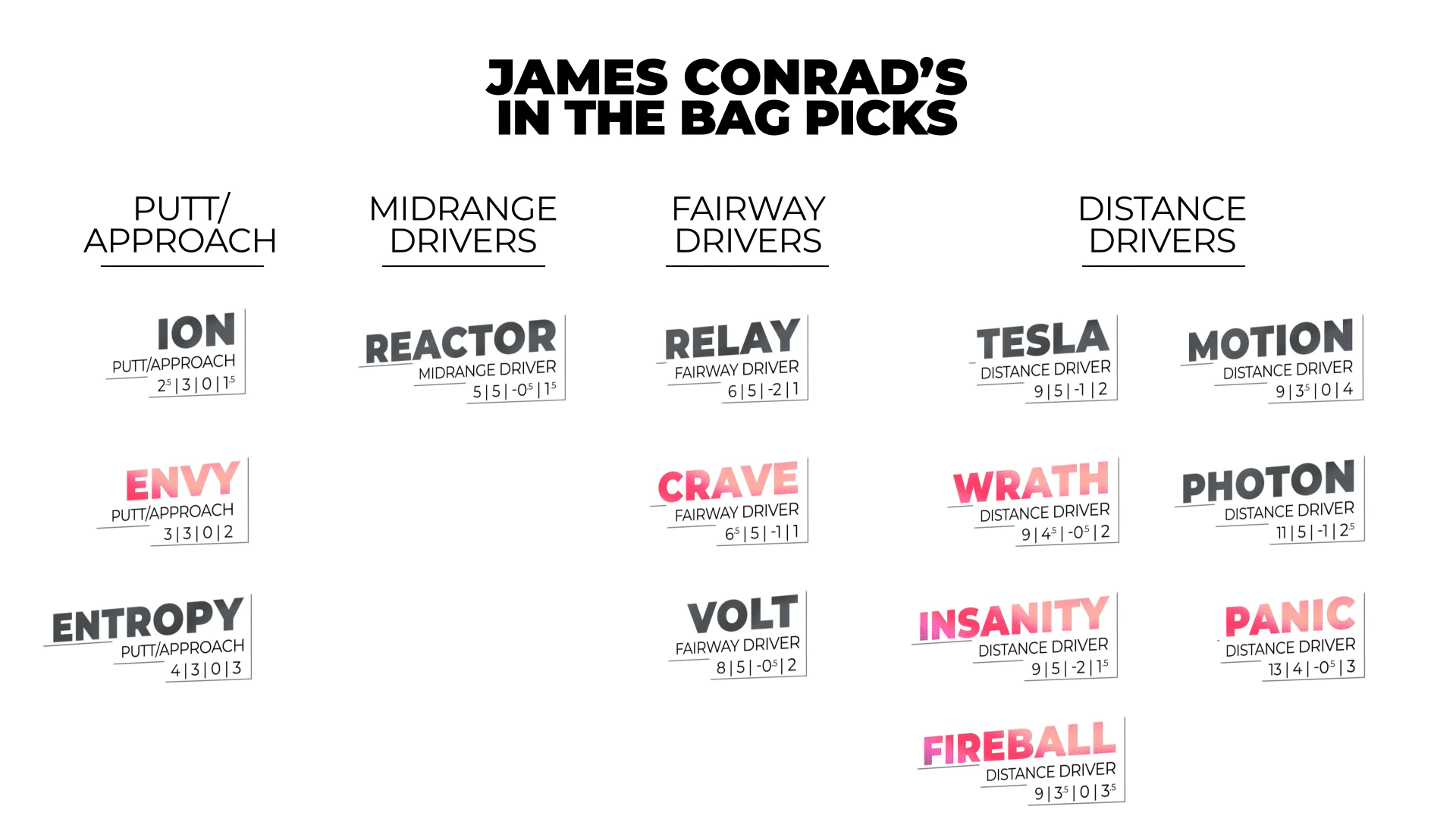 James likes hiking, live music concerts, and travelling with his partner, Jordan Kim. You can check out Jordan’s blog for more info on the perspective of their lives. Also check out James’ social media accounts; Facebook and Instagram.

Here’s a video of James Conrad in the bag:

Hi there! I am Tõnis from Estonia and I'm a professional disc golfer. I've been playing disc golf for over 7 years. I am a true disc golf fanatic. I hope you enjoy my disc golf blog.

A disc golf bag is an important equipment to have, if you want to enjoy the game of disc golf to the fullest. Besides being the best way to carry your discs, a disc golf bag can help you carry other...

On January 22nd 2023 Estonian disc golf club Five Under hosted an event inside of one the biggest shopping centres in Estonia, T1 shopping centre at Tallinn. This was the first time ever disc golf...

Not what I wanted to read.

This slow-mo air bounce throw-in with the leaves .

In search of green teepad 😆

What sorcery is this? 😁