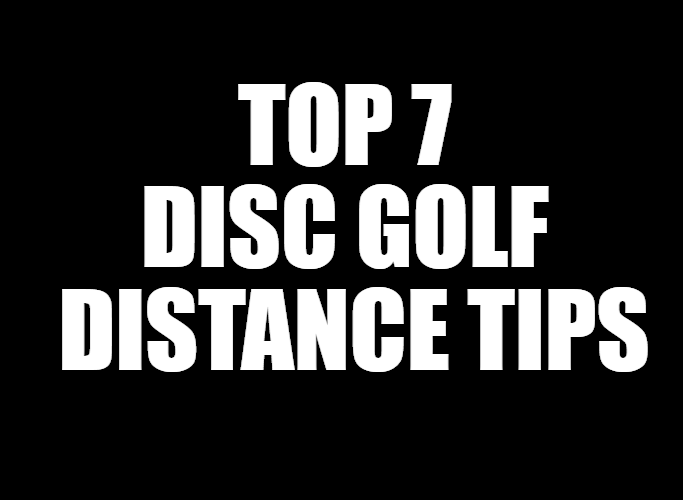 Distance shouldn’t be your main concern every single time you play. Instead, your main priority should be how to get the disc into the basket with the fewest good and accurate amounts of throws as possible. Once you can throw accurately, you can then start worrying about throwing it super far.

Let’s be very honest, not many of us – not even most of the pro disc golfers – will ever throw an incredible distance of 1,108.9 feet (337.99 meters), which remains the record for the longest disc golf drive ever. This record is held by pro-disc golfer David Wiggins Jr. who only managed a very respectable 525 ft. (160 meters) distance in the longest drive competition.

What’s my point here? Whether you’re just a beginner or a pro-disc golfer, we’re all captivated by increasing our driving distance, which is quite understandable. After all, playing disc golf is all in length. Like in traditional golf, the longer you can throw the disc the better your chances of attaining a low score.

Most players do agree that using a backhand is the best technique to throw farther. To perfectly execute a backhand throw, you should push the disc behind your body before fully extending outward from point A to B.. However, there’s more to it than just throwing farther.

You always have to keep in mind that the only thing recorded on your disc golf scorecard is your score and not how far you can throw. In other words, there are more important things to think about than how far you can throw the disc.  The most important thing is to practice and hone your skills so that you can not only get the disc where you want, but can also complete the hole with as few shots as possible.

Here are 7 tips to help you get the best of both worlds (distance and accurate shots).

1. Take a Shot that has the Highest Chance to Land Near the Basket

This is a tip that you won’t hear that often but it’s certainly the most crucial. And if you attended disc golf clinics, watched numerous YouTube videos, and even took loads of advice from a more advanced friend and can’t get it right, it’s because you’ve ignored this tip.

Let’s put it this way; do not worry yourself or get frustrated if your disc won’t go past the 300 ft. (91 meters) mark. Well, it wouldn’t make any sense at all to throw past the elusive 300 ft. mark only to find out that your disc landed in the bushes, tall grass or in a place that will make the run-up for your second shot impossible. This can be a really ugly situation that may drain your confidence even if you threw over 400 ft. (121.92 meters)!

In essence, don’t put yourself under lots of pressure to throw farthest. Instead, relax and work your way around the most important thing: leaving yourself with the easiest possible putt! You should place clean and good drives that do not leave you with a difficult shot but gives you the easiest possible approach shot. No matter how far you throw, your upshot should never be limited and so all you need to worry about is getting near the basket in the first place.

2. Go for Accuracy and Placement

It’s possible to hit the entire length of a football field or even throw your disc past 400 ft. but you should ask yourself; how far can I throw accurately? How far can you throw the disc and have it land where you intended? This is probably the main difference between pro-disc golfers and amateurs.

It’s essential that you focus more on accuracy and placement than distance. Believe it or not, having the best approach shot is much better than throwing farther. If a shorter drive leaves you in a much better position to hit the basket, so be it. It’s, therefore, important that you check the course or the hole before playing so that you can process what you should do to leave you in a better position to hit the basket.

You now know your distance and accuracy capabilities, but something is still holding you back from achieving it. Well, it’s your mind that’s holding you back. Disc golf is not a matter of life and death. If anything, it’s a thrilling game that should relax your body and mind. As such, there’s no need to tense your muscles.

You’ll only get the distance you want if your throw is smooth. In other words, tense muscles do not move fast as they tend to slow your shots and may end up limiting your distance and driving speed. Tensing your muscles is great if you’re in a boxing match, but not great when playing disc golf. It’s, therefore, important that you remain relaxed up until when the disc is in your hand before you explode into the rest of the throw and ultimately release the disc.

4. Learn How to Get a Good Grip

When it comes to getting a good grip on the disc, your grip should be tight but not knuckles tight. Do not strangle the disc. Instead, make sure that you wrap your fingers around the contours of the disc in a tight manner. Your wrist and arm should not be very tight and tense. Keep them relaxed so that the disc doesn’t lose the momentum that you impart on it. If the grip is too loose, chances are the disc will slip out of your hand and this will lead to ineffective shots. You should, therefore, practice to have a good grip so that your release is on point and you get the maximum momentum on the disc.

In addition, I recommend to always clean the disc before throwing it as it may be wet, dirty or dusty, which has a big impact on the grip.

One of the most common misconceptions when it comes to playing disc golf is that running up to tee up can improve your shot’s speed and translate to farther distance. Believe it or not, run-ups can produce a little bit more power, but it will come at a cost. Unfortunately, that will significantly reduce your accuracy and that’s why you rarely see pro disc golfers sprinting to the tee.

That being said, it’s more beneficial to take smooth walking pace steps and then take a bigger and faster final step. Keep in mind that the power of your drive does not come from your back muscles or your arm. Instead, it comes from your hips. This is essentially why your body should face the opposite direction of where you want to throw just before you take your big final step.

You should take the final bigger step, plant your foot down, twist your hips and pulling your arm through your swing. At this point, the disc should rip out of your hand, but be sure to follow through the swing to prevent any possible sprains or strains on your ligaments and muscles.

In essence, it’s inappropriate to focus all your energy on your arm. This will most probably lead to what Dave Dunipace, the Co-founder and president of Innova, refers to as “all arm” throw. In most cases, an “all arm” throw lacks core and lower body engagement that’s integral in building momentum and power. The idea here is to tip the whip and generate more power to your throws.

To maximize distance, you need an appropriate disc golf driver that matches your release velocity and power. If you’re a beginner or still honing your technique, it’s important to leave overstable and stable discs at home as they tend to hyzer too soon, which means that they won’t fly as far as they should. Instead, try an understable disc since your arm speed is still slower and this is perfect for such types of discs.

You can also try lighter discs to add some extra distance. The idea here is that you can throw lighter discs faster than heavier discs and this would translate to more distance.  You should also choose discs with more glide if you want to throw farther. Beginners generally have lower arm speed and more glide will counter this and enable your disc to stay longer in the air, thereby flying farther.

Check out my list of 12 Best Disc Golf Distance Drivers.

Pros and the best in the world obsessively insist on it. Whether you religiously follow YouTube videos, attend disc golf clinics or seek advice from the best players, they all insist on the virtue of diligent practice.

Good practice will make you a better player. As Paul McBeth always says; don’t just practice, have perfect practice. Do it consistently and throwing your disc farther will become second to nature.

The key to throwing farther is not to let your initial failure discourage or frustrate your game. All you have to do is to practice, be patient, follow the above-described tips and you’ll be as good as the pros. At the end of the day, the main aim should be to hone your technique, finish the hole with as few throws as possible and most importantly have fun while playing disc golf.