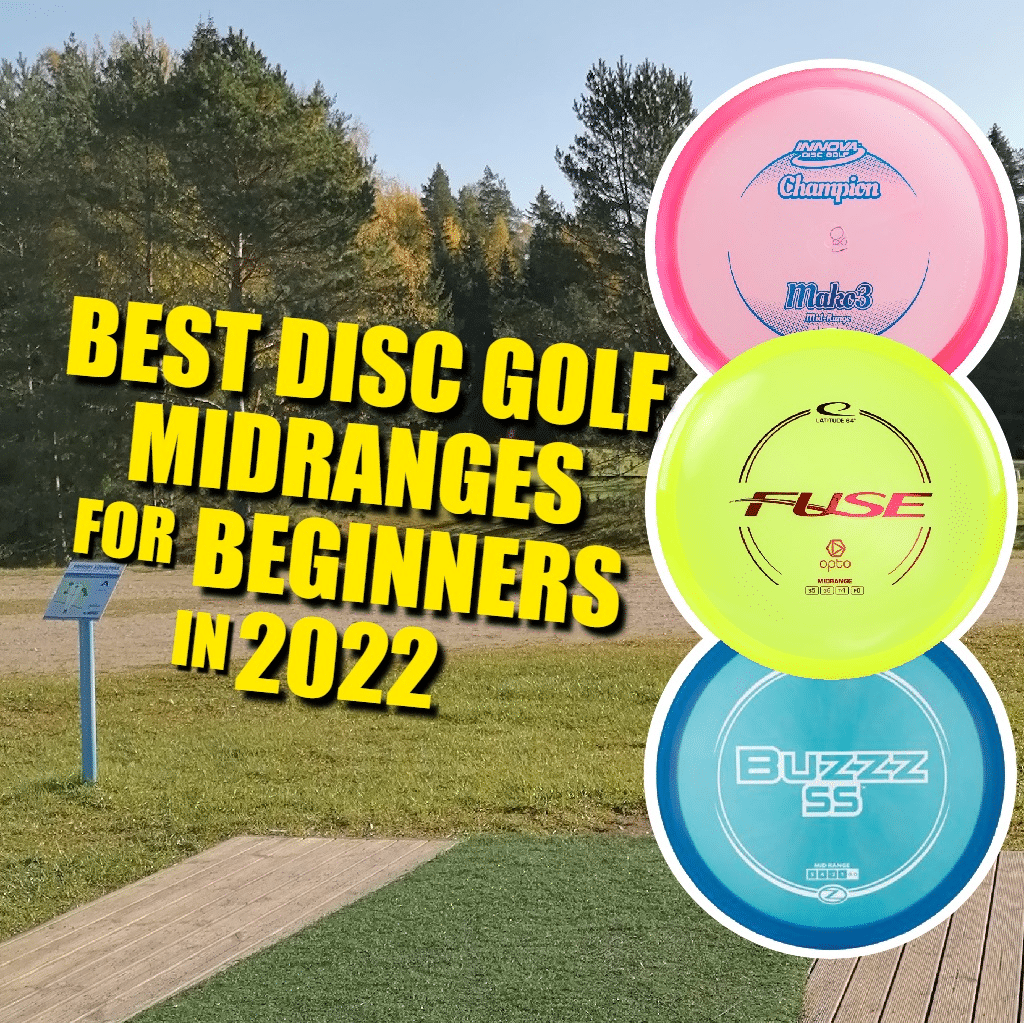 The midrange disc golf discs are one of the best bets for beginner disc golf players. And I’ll tell you why.

The midrange discs are basically faster versions of putters. Throwing midranges instead of putters will help you gain more distance yet remain deadly accurate. While you may hear others adoring fairway and distance drivers more, they’re simply not as accurate as the midrange discs, particularly for the amateurs.

Not only are the midrange disc golf discs more accurate than drivers they will fly further than putters. Besides, they’re one of the best discs to add to your arsenal to seamlessly try out a variety of shots.

Now, with so many disc golf manufacturers flourishing in the market with numerous products on display, choosing the best midrange disc is not an easy task. Hence, I’ve compiled a list of my favorite beginner-friendly midrange discs from the best brands to choose from. So, without further ado, let’s dive straight into this. 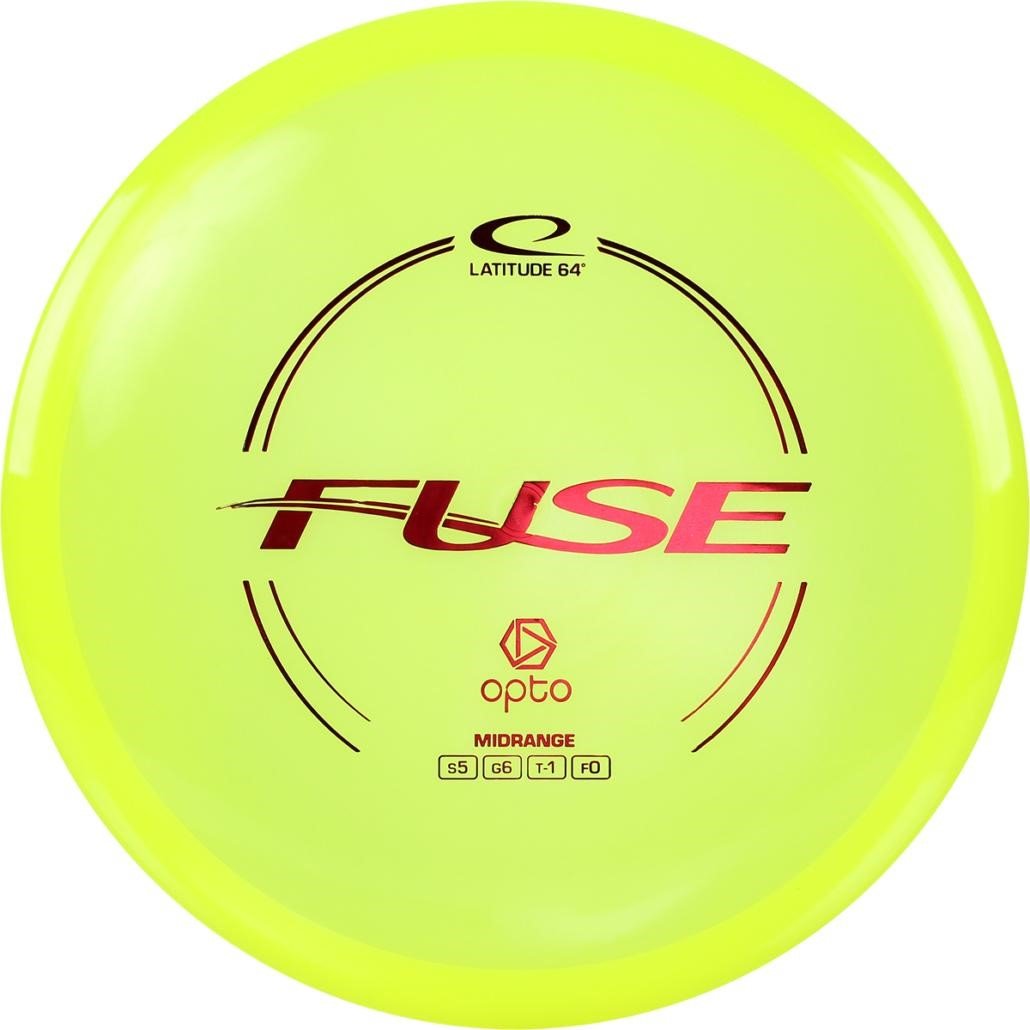 To begin with, here’s the best midrange every single beginner should most definitely try out – Latitude 64 Fuse – the most versatile midrange disc golf disc with superb gliding capabilities. Courtesy of its well-engineered design, it suits all disc golfers hands and feels amazing to throw.

It has an under-stable flight path that handles both straight and curved paths with negligible fade. Do you want a disc to weave through every obstacle or tree in a breeze or glide in the air for a considerable time? If so, get yourself a Latitude 64 Fuse! In addition to beginners, I’d recommend the Fuse for players, who are throwing hyzerflips or long turnover shots. Check out the Latitude 64 Fuse here on InfiniteDiscs.com. 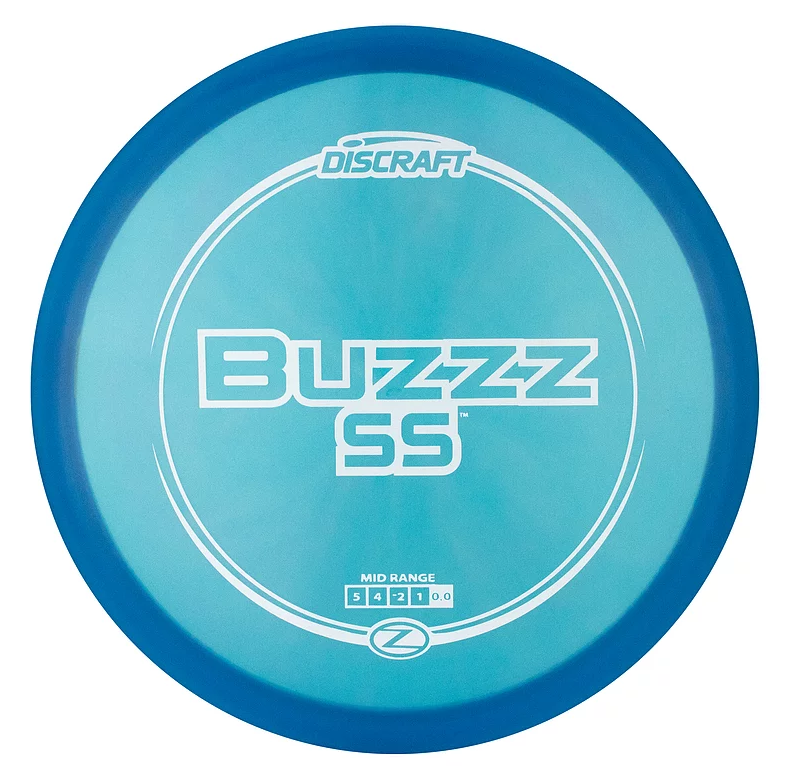 Discraft Buzzz SS is one of the most popular midranges in the disc golf industry, particularly for newcomers as it’s an extremely beginner-friendly disc.

It’s a tweaked version of the original Buzzz with less stability. However, this shouldn’t be held against the disc. The disc has an ultra-smooth straight flight pattern and a minimal fade at the end.

What differentiates Buzzz SS from other models is its easy handling and predictability, making it the best fit for approach shots, tailwinds, tunnel shots, hyzerflips, and anhyzer turnover shots. Grab yours here on InfiniteDiscs.com. 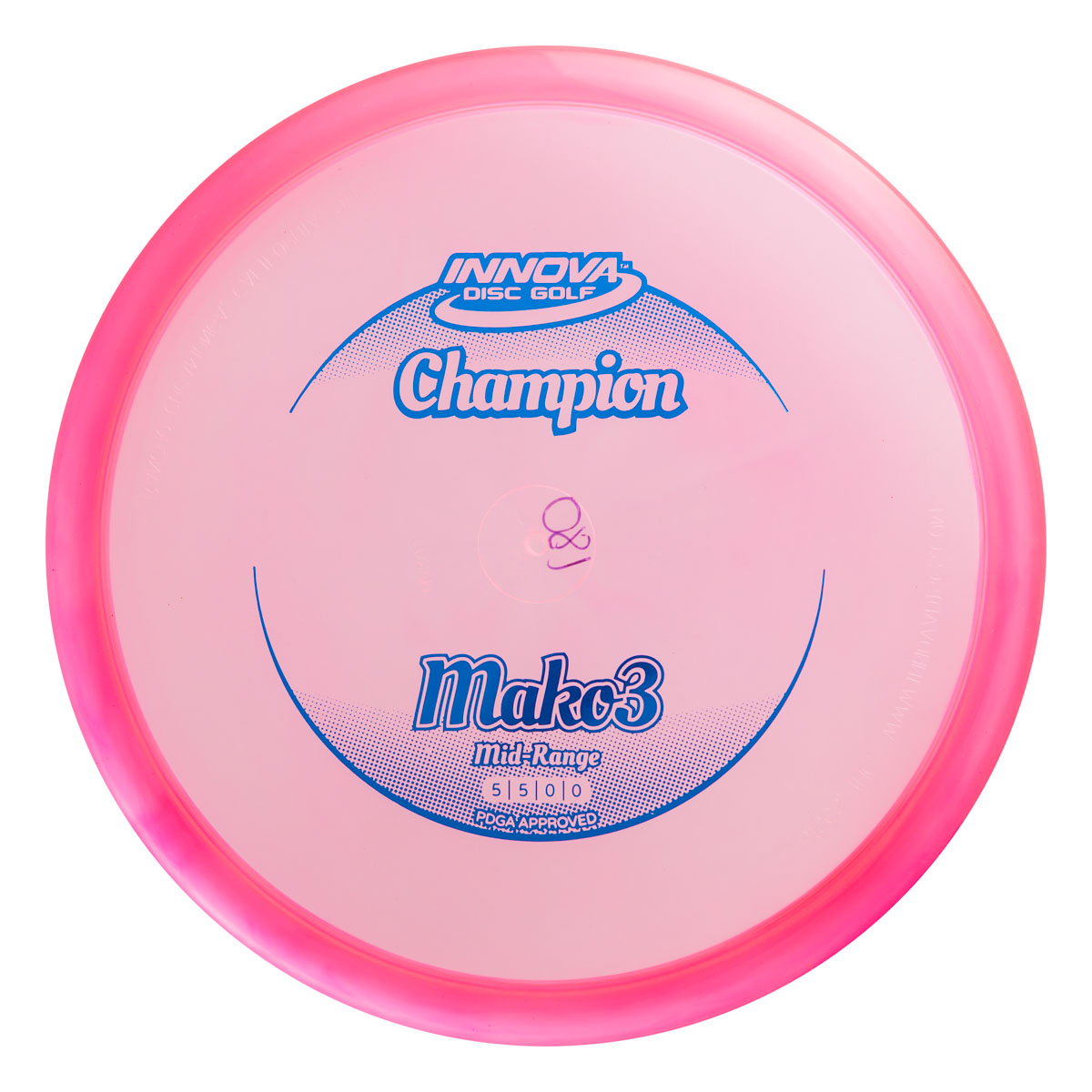 The next mid-range disc in the queue is the Innova Mako3. It’s a low-profile and slightly faster version of its predecessor the Innova Mako. It’s crafted from three different types of plastics – Champion (a bit more stable), GStar, and Star.

You can expect other plastic-based models such as DX, Pro, and Echo Star in the future. If you’re a beginner and want a disc that goes straight as an arrow, the Innova Mako3 is for you.

Mako3 should be your first preference for shots such as dead straight tunnel shots and smooth hyzerflip throws. Here’s what David Wiggins Jr., current distance world record holder, has to say about Innova Mako3.

“The Mako3 is an excellent choice for laser-straight shots that require control and accuracy. It has lots of glides and is easy to throw, making it a great choice for threading lines down tightly wooded fairways.” Interested? Grab an Innova Mako3 here on InfiniteDiscs.com. 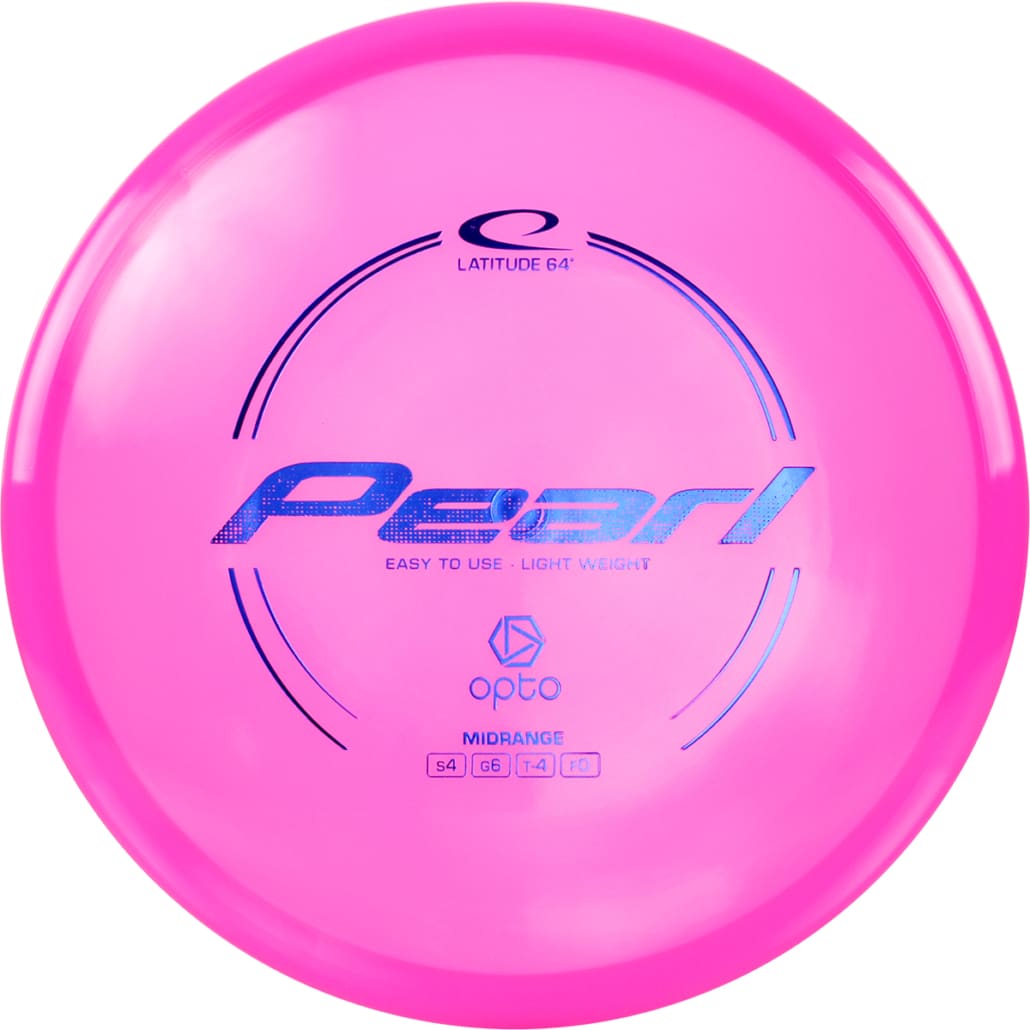 The Pearl is another excellent midrange disc for beginners from the Latitude 64. It’s suitable for players with a low arm speed or female disc golfers, who want to throw smooth hyzerflips or turnover shots.

The disc has an interesting combination of glide and turn to pass through any obstacle in a fairly straight path. And guess what? There’s a very negligible fade at the end. Another fascinating aspect of the Latitude 64 Pearl is the pinpoint accuracy that even other stable or overstable mid-range discs can’t offer. Check out the Latitude 64 Pearl here on InfiniteDiscs.com. 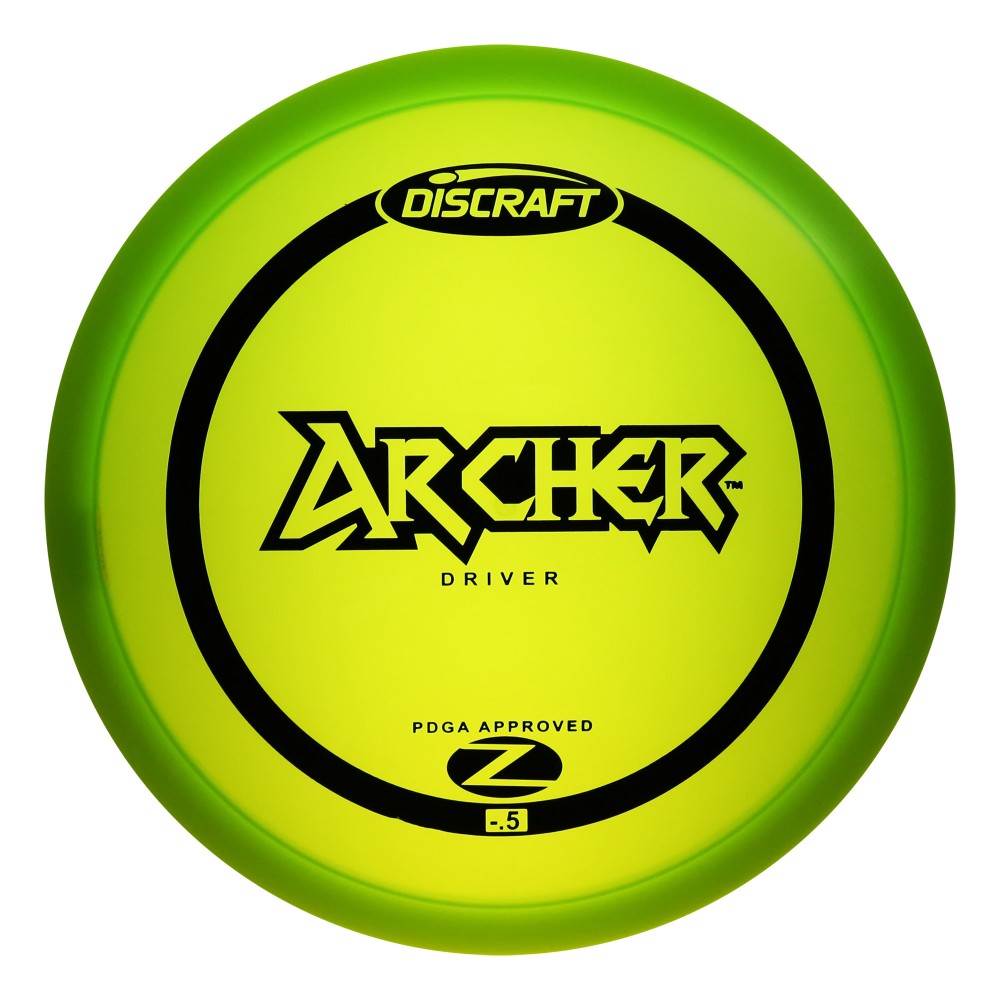 If I were to describe Discraft Archer in a single sentence, it’d read something like this: An easy-to-throw, understable, and small rimmed mid-range disc golf disc with great capabilities.

The current models of Discraft Archer discs are made from ESP plastic which is both sturdy and long-lasting. If you routinely throw discs on a hyzer angle, this Discraft Archer won’t disappoint you. Further, the disc follows a straight path with a slight fade towards the end.

What adds to this disc’s versatility is its ability to fly long distances even if not thrown with full force or in an uncomfortable position. Grab a Discraft Archer here on InfiniteDiscs.com. 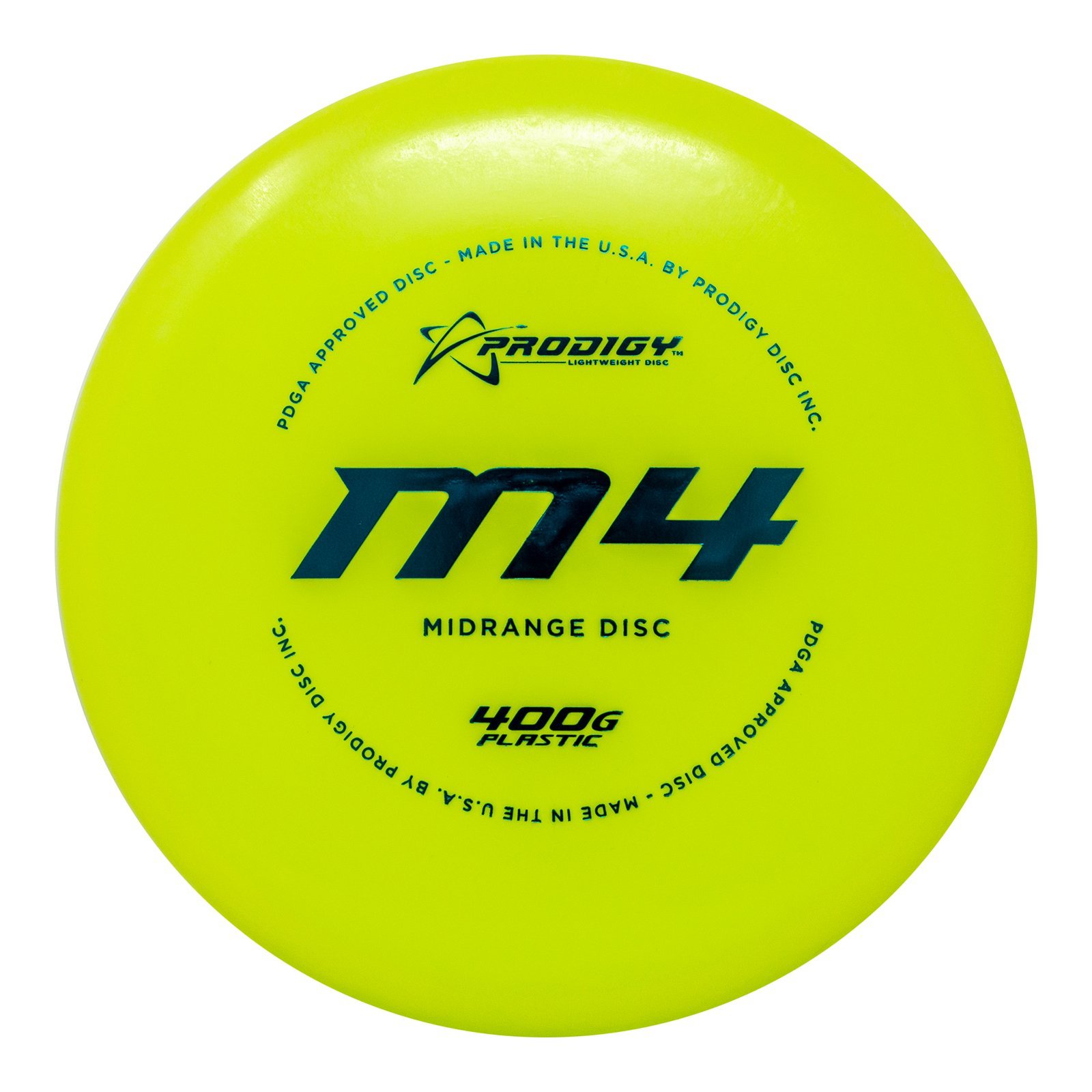 Among the three distinct mid-range disc golf discs from Prodigy, its M4 is the most-sought model among beginners, and for good reasons that I’ll discuss it next.

To begin with, the Prodigy M4 features the “Early Release” technology that makes it fly further, even with nominal power. The Prodigy M4 is an excellent understable midrange and is famous for its dead straight flight path and tremendous amounts of glide.

In case you’re wondering about its speed, it rightly falls in the speed 5 category. In other aspects, it doesn’t differ much from the Discraft Buzzz SS. If the Buzzz SS starts flipping on you, you should most definitely try out the M4. In addition, you might also find the M4’s low-profile design a blessing.

All in all, Prodigy M4 is an all-in-one mid-range disc with spectacular glide, and minimal fade, making it perfect for beginner disc golfers. Get yours here on InfiniteDiscs.com. 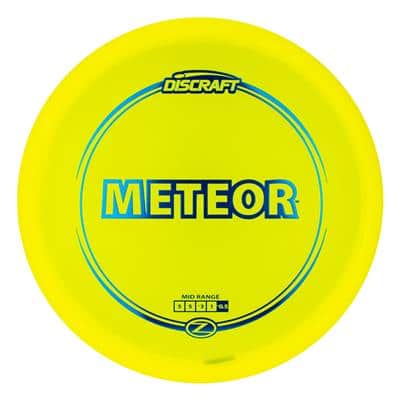 Moving ahead, Discraft Meteor is not just an ideal fit for beginners, but for all disc golfers. Meteor belongs to the speed 5 category and has a minimal fade at the end.

The Discraft Meteor, which resembles Innova Stingray, is a great alternative for putters for slow turnover shots due to its smooth glide. Grab yours here on InfiniteDiscs.com.

No matter how passionate or skilled you are in disc golf, you can’t experience its true form without throwing a mid-range disc. Not only do midranges fly farther than putters, they are deadly accurate and relatively easy to control.

If you’re struggling in choosing the best mid-range disc golf discs for beginners, just try out the above-mentioned midranges, you will not regret it!

Let me know your thoughts in the comments below and which disc makes it to your arsenal.

Ever wondered what putting putters Paul McBeth, Ricky Wysocki or Paige Pierce use? I’ve compiled a huge list of professional players and their putting putters, check it out here – https://discgolffanatic.com/what-putters-professional-disc-golfers-use/

Here’s a list of the Best Disc Golf Discs for Beginners – https://discgolffanatic.com/best-disc-golf-discs-for-beginners/

Got discs, but need a disc golf bag?

Check out this list of 12 Best Disc Golf Bags for 2022 – https://discgolffanatic.com/best-disc-golf-bags/