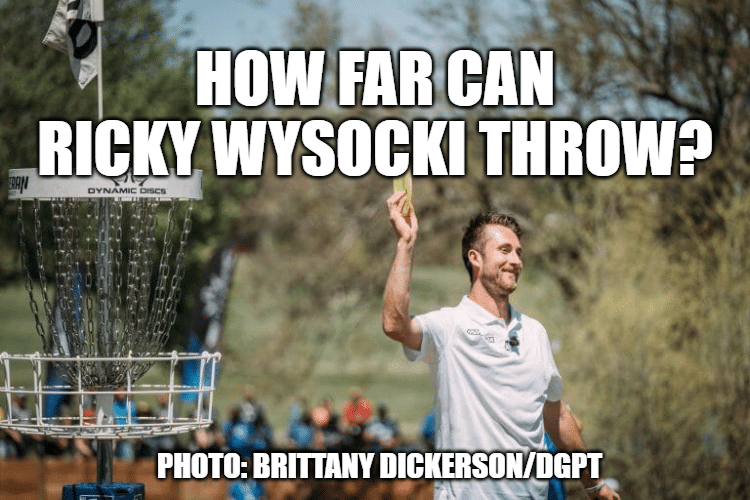 He was crowned as the PDGA World Championship winner in 2016 and 2017, winning back-to-back World titles and defeating, then a four time World Champion, Paul Mcbeth.

How far can Ricky Wysocki Throw?

Ricky Wysocki, AKA Sockibomb, is known to cover massive distances of 500+ feet (recorded on video) accurately, which is over 152+ meters for my European friends, in a single throw from the teepad! He’s been throwing Lucid-X Enforcers, Latitude 64 Ballista Pros and Dynamic Discs Raiders while being sponsored by Dynamic Discs and was using Innova Destroyers as his go-to distance drivers while he was sponsored by Innova Champion Discs. FYI! In the beginning of the 2022 season, at the Las Vegas Challenge, Sockibomb threw an insane 120′ throw-in on hole 17. His “bad” opening drive off the teepad was almost pin-high, and it was a 139 meter PAR 3 (457 feet) … I’ll say this again, this was his bad shot … This might give you a glimpse on how far can Ricky really throw.

We may easily conclude that a distance of 500+ feet (150+ meters) is no big deal for Ricky Wysocki.

Click here to check out what discs is Ricky Wysocki throwing in the 2022 season – https://discgolffanatic.com/ricky-wysocki-in-the-bag-2022-team-dynamic-discs/

Ricky’s Major winnings through these years include the 2011 PDGA Championship (not Worlds), where he beat Nate Doss. Then in 2014 and 2015, knocked out Nikko Locastro and Mcbeth in the Japan Open and European Masters, respectively.

2016 and 2017 were Ricky’s best years as he defeated the number one player in the world, Paul Mcbeth, in the PDGA Pro World Championship. He also won the 2016 PDGA national tour series.

Innova Discs initially sponsored him from 2011 to 2012. However, Ricky left Innova in 2013 and joined Prodigy discs. Then in 2016 and 17, he won the World Champ title using Latitude 64 discs. However, in 2019 he returned to Innova and signed a five-year contract with them.

“I am thrilled to return to Innova family, the first company to take a chance on me when I was young and inexperienced. To say that I’m excited would be an understatement. I look forward to the opportunity to grow Innova’s brand—and mine—for years to come!” Wysocki has stated.

Afterward, he signed a contract of 4 years with Dynamic Discs, worth a $4 million endorsement deal. He has also been offered to earn more than that through incentives and bonuses. Ricky will also receive a $250,000 signing bonus paid out in Bitcoin.

If you made it this far, I highly recommend subscribing to Ricky Wysocki’s YouTube channel.