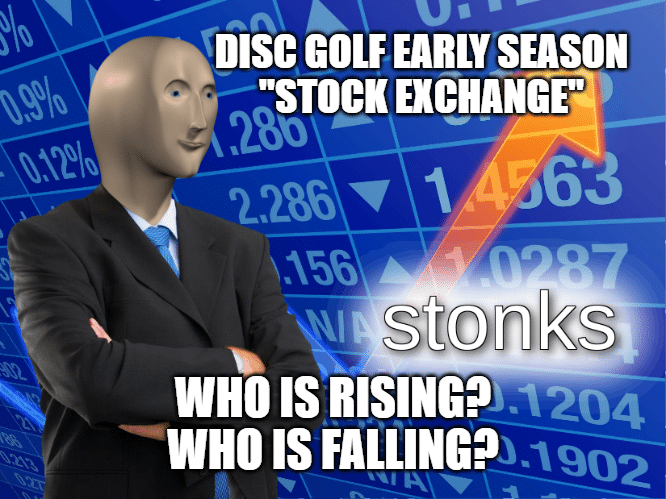 With the first four DGPT events of 2022 in the books, it’s a good time to take an early “Stock Exchange” look at the MPO and FPO fields. Who is rising? Who is falling?

Valerie Mandujano — The young Dynamic Discs-sponsored Texan already was a world top-10 player at the close of 2021. Now she’s knocking at the door of the top five. She captured her first national tour/Elite Series victory with a strong final round to claim the Waco title, and has since finished second in the Open at Belton and fourth in the Texas State Championship. She is fourth in the current DGPT season standings.

Gannon Buhr — The 16-year-old’s second-place finish in a playoff against Drew Gibson in Las Vegas put a bright spotlight on his future potential. He was solid in Texas, finishing seventh, and stands fifth in the DGPT season standings. A top-20 player entering 2022, he is on pace to be in the top 10 by the end of it.

Luke Humphries — Best known as the host for the OTB Tour Skins series, Humphries made noise with his own play in the first two DGPT events of the year, tying for fourth in Las Vegas and finishing second in Waco. He’s come to Earth a bit since, tying for 24th in the Open at Belton and tying for 45th in Texas. But he stands sixth in the DGPT season standings as the biggest surprise of the year’s first three months.

Joel Freeman — He tied for third in Waco and tied for fourth in Texas, along with a tie for 24th in the Open at Belton. Those results have him in eighth in the DGPT season standings, and he’s among the tour leaders in fairways hit (77%) and Circle 2 in regulation (70%).

PS! Did you know that the last time a non-USA MPO disc golf player won a DGPT event was back in 2018? Continue reading here – https://discgolffanatic.com/when-will-a-non-usa-mpo-disc-golf-player-finally-win-a-dgpt-elite-series-event-again/

Ricky Wysocki — One of the knee-jerk overreactions just a handful of weeks ago was, “What is going on with Ricky?” He tied for seventh in Las Vegas and tied for 12th in Waco, and it’s a compliment to his amazing consistency that those results seemed to indicate a dip in his play. Well, that’s all it was — a slight dip. He tied for second in the Open at Belton and is now the Texas State Championship winner for the sixth time. Oh, and he now leads the DGPT season standings.

Calvin Heimburg — The three-time DGPT winner wasn’t quite able to close the deal in Texas as Wysocki chased him down, but he still has finished second in Texas, third in Las Vegas and tied for sixth in the Open at Belton. That’s good enough to stand second in the DGPT season standings.

Chris Dickerson — In addition to his victory in the Open at Belton, he tied for fifth in Waco, tied for eighth in Texas and tied for 12th (albeit with a disappointing final round) in Las Vegas. He stands third in the DGPT season standings.

Paul McBeth — Until the final two rounds in Texas, I would have had McBeast in the “stock going up” category because he was absolutely shredding. He won the A-tier Memorial with the two highest-rated rounds of the year to date (1108 and 1098), won Waco and tied for second in the Open at Belton — and then fired a 1086-rated first round in Texas. But he played 2-over golf over the next 27 holes and fell into a tie for eighth. He’s fourth in the DGPT season standings.

Paige Pierce, Kristin Tattar and Catrina Allen — The world’s top three players (though the order has been hotly debated) have only solidified their claims to those top three spots so far in 2022. Pierce closed the Texas victory with a strong final six holes to defeat her two main rivals for her first victory of the year. Tattar won the Memorial Championship (a significant A-tier) and has finished in the top three in each of the four DGPT events so far. Allen won the DGPT season-opening Las Vegas Challenge and the Open at Belton.

Eveliina Salonen — The Finnish star placed fifth in Las Vegas, led through two rounds at Waco before faltering to ninth, then was a non-factor in Texas, tying for 27th. It’s all about her putting, which — there’s no nice way to say this — has been dreadful. She’s at 34% from Circle 1X, ranking dead last on tour, and 2% from Circle 2. She is fantastic from tee to green, ranking first in Circle 1 in regulation at 49% and in Circle 2 in regulation at 68%. But if she doesn’t make putts, none of that will matter.

Henna Blomroos — Salonen’s Finnish rival has also had a bit of a rough start to 2022, though not with as clear a problem area. She tied for 25th in Las Vegas but has performed better since, tying for sixth at Waco and placing seventh in Texas. She could easily play her way right back into the “stock up” category with a couple more top-five efforts, but for now she stands 11th in the DGPT season standings, and that’s lower than expected.

Kyle Klein — In truth, I probably expected too much from the breakout player of 2021. He certainly hasn’t been bad — he’s placed in the top 25 in each of the first four DGPT events, including fifth in the Open at Belton, and stands 14th in the season standings — but I had him as a top-10 player, so his results are just low enough to land him here.

With the first four DGPT events of 2022 in the books, what player’s stocks would you buy/sell?
Leave a comment down below!