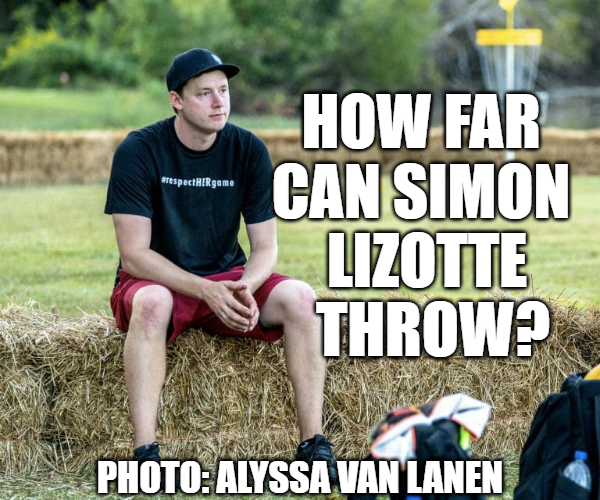 Simon Lizotte aka The Wunderkind aka The Crush Boy, PDGA #8332, is a professional disc golfer from Bremen, Germany, who now lives in Shrewsbury, Massachusetts, United States. Lizotte is widely known for his huge arm, trickshots and “Simon lines” playstyle. Alongside with Eagle McMahon, the second part of The Crush Boys, Simon is very likely to have the longest drive in the game and he also holds the unofficial record for the fastest disc golf throw ever recorded at 144km/h (89.5mph).

How far can Simon Lizotte throw?

Simon Lizotte is widely considered as one of the farthest throwers in disc golf history, he held the disc golf distance World Record title from 2014 to 2016. Back in 2014 he threw a 863.5 feet shot and later in 2016 broke his own World Record with a massive 903.9 feet (275.5 meters) throw. But wait that’s not all, Simon Lizotte’s personal best disc golf distance drive stands at 1030 feet (314 meters), which was achieved using a 360-backhand throwing technique and heavy 20-40 mph tailwind. During disc golf tournaments, Lizotte alongside with McMahon are probably one of the few if not only disc golf players in the world, who can consistently break the 650′ barrier and occasionally even 700 feet distance barrier with their backhand throws. No wonder they are referred as the “Crush Boys”.

Here’s a video of Simon throwing in more realistic conditions. He threw a bomb of 708 feet aka 215.8 meters. He used a Discmania Cloud Breaker 3, which is his go-to MAX distance driver, with a 360-backhand throwing technique and his armspeed was measured at 79 miles per hour (127.1 km/h).

Click here to grab your Discmania DD3 here on InfiniteDiscs.com.

What are Simon Lizotte’s “Simon lines”?

Simon Lizotte is best known for his INSANE “Simon lines” backhand throws. What exactly are “Simon lines”? Well, if you can throw over 600+ feet (182+ meters) it will open a lot of doors for you, such as going over EVERYTHING, including the trees. Why? Because there are no trees in the sky, simple as that.

Just watch this throw from Simon Lizotte, parking a 435′ hole while his disc goes 200′ in the sky!

No wonder the Discmania DD3 also made it to my “Best Disc Golf Distance Drivers” list. If you are looking for more disc golf distance drivers, I’d recommend you to check out this article – https://discgolffanatic.com/best-disc-golf-distance-drivers/

If you made it this far, I highly recommend subscribing to Simon Lizotte‘s YouTube channel.

Also, I recommend checking out these 2 videos from Simon Lizotte on the topic of backhand form.

One thought on “How far can Simon Lizotte throw?”

link to 5 Best Disc Golf Bags for Beginners in 2022

Newer disc golf players frequently resort to using their old gym backpacks or any other ordinary bag to store their discs, which exacerbates the situation, as it results in you spending an excessive...

This article will be about "Ricky Wysocki IN THE BAG 2022 - Team Dynamic Discs", but it's still in the making as Wysocki has just recently signed a 4 year, $4 Million Conract with Dynamic discs This...

Best looking DIY basket EVER, period. Made by @ke

Simple question. Do you hate or love playing disc