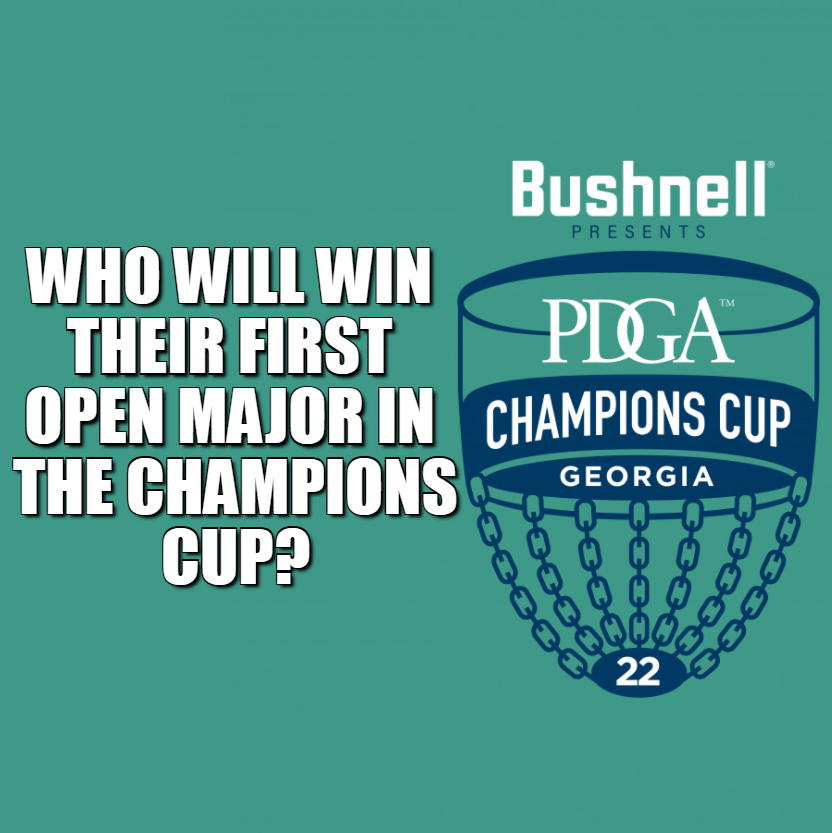 The first major championship of 2022 — the PDGA Champions Cup at the famed W.R. Jackson course in Appling, Georgia — is a little more than one week away.

Let’s take a quick look at the players — both long-time veterans of the sport, and fast-rising youngsters with bright futures — who are the most likely to earn their first Open division major championship.

Calvin Heimburg — One of four players ever to surpass the 1050 rating milestone (he peaked at 1054 in March 2021), the Heimborg currently sports a 1048 rating and has three national tour victories and two other DGPT Elite Series titles on his résumé. In all, he has 12 A-tier-and-higher victories as a pro. He was the 2020 USDGC runner-up.

Kevin Jones — He has 12 A-tier titles to his credit, including three DGPT Elite Series victories (including the 2020 DGPT Championship) and a Silver Series win. His current 1039 rating matches his highest to date. His top majors finish is third in the 2018 USDGC.

Drew Gibson — One of the longest throwers in the sport, he’s a two-time DGPT Elite Series champion, including the first national tour victory of his career in the Las Vegas Challenge in February. He has six A-tier-and-higher victories as a pro. Currently rated 1038, he peaked at 1039 in March 2021.

Adam Hammes — A two-time national tour champion, including the DGPT Elite Series MVP Open last September, the Hammer has seven A-tier-and-higher victories in all. His current rating of 1041 is his highest to date.

Kyle Klein — The youngster already sports a 1040 rating, a national tour victory (in the DGPT Elite Series Idlewild Open last year) and three A-tier-and-higher wins as a pro. He took Paul McBeth into a playoff in last year’s USDGC.

Paul Ulibarri — The 2006 PDGA amateur world champion is still seeking that elusive Open major. He’s a 27-time A-tier-and-higher winner, including one national tour title (the Brent Hambrick Memorial in 2011). He has a current rating of 1029 and a peak rating of 1035 in 2012. He finished second in the 2010 Worlds and the 2011 European Open, and third in the 2016 European Masters.

BONUS SLEEPER PICK: Michael Johansen — The veteran woods-golf master is a 17-time A-tier-and-higher champion, including the national tour Hall of Fame Classic in 2015. Currently rated 1018, he peaked at 1034 in 2018. He finished fourth in both the 2012 Worlds and 2016 USDGC.

PS! Did you know that the last time a non-USA MPO disc golf player won a DGPT (Elite Series) event was back in 2018? Continue reading here – https://discgolffanatic.com/when-will-a-non-usa-mpo-disc-golf-player-finally-win-a-dgpt-elite-series-event-again/

Before diving into the FPO division, take a look at the 2022 PDGA Champions Cup Course Walkthrough:

Henna Blomroos — The Finnish star is an 18-time A-tier winner, including four Finnish Nationals titles and a European Championship victory. She was the runner-up in the 2017 and 2019 European Opens and the 2018 Konopiste Open. She currently has a 968 rating and has been as high as 977.

Hailey King — The youngster already has four national tour victories, including two DGPT Elite Series titles (one of them the 2020 Tour Championship), and her current 970 rating is her highest to date. She was the runner-up in last year’s USWDGC and was fourth in last year’s Worlds.

Ohn Scoggins — The veteran has a Pro Masters 40+ major championship at last year’s Worlds to her credit, but not an Open division one. She’s a 13-time Open A-tier winner with a current rating of 961 and a top rating of 964, at the start of this year. She placed fourth in both the 2014 and 2015 Worlds.

Missy Gannon — The 2021 DGPT player of the year is an eight-time A-tier-and-higher winner, including last year’s DGPT Elite Series Des Moines Challenge and the DGPT Championship. Her current rating of 957 is her highest to date. She placed fourth in last year’s USWDGC.

Valerie Mandujano — A three-time junior girls world champion, she already has six A-tier-and-higher victories to her credit, including the DGPT Elite Series Waco Charity Open earlier this year. She currently has a 952 rating and peaked at 956 in 2020.

Jessica Weese — The veteran has 25 A-tier-and-higher victories to her credit, including a national tour title in the 2015 Beaver State Fling. Currently rated 948, she peaked at 952 in 2015. She was the runner-up in the 2017 USWDGC and placed third in the 2018 Worlds.

Alexis Mandujano — Like her sister, she is a three-time amateur world champion. Her current 945 rating is her highest to date.

Which of these players will most likely dominate their respective field and win their first Open major in the Champions Cup?
Leave a comment down below!

Here are 12 players — six in MPO and six in FPO — to keep an eye on over the next decade. Click here to continue reading.